Developers are running the show The developers are laughing at us. We think we have some control over the way our environment is used, but in fact they have it all.
The Voice Of Pelham Nov 25, 2022 9:20 PM

Developers are running the show

The developers are laughing at us. We think we have some control over the way our environment is used, but in fact they have it all. At the local level, we have zoning bylaws which we think prevent sensitive areas from being developed. The developers simply apply for a zoning change and voila!, they’re off.

At the provincial level we have “protected” areas within the Greenbelt, but a few words to their buddy Doug Ford and large pieces of the Greenbelt are handed over to them to devastate.

We know that we can’t eat concrete and money, but with the huge donations that flow into the coffers of the Progressive Conservative Party from Doug’s buddies, there is little chance that we can keep these valuable farmlands.

Yes, the developers are laughing at us. 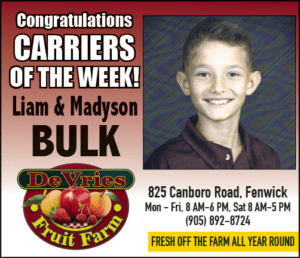 If you are heading south and taking the detour around the Pelham Street construction, please note that there is a stop sign on John Street (the extension of Pancake where it crosses Pelham Street at the north end of the construction zone). I’d estimate every other car is either rolling through or completely blowing through the sign to turn right on to Stella Street.

Stella Street has no stop sign. This means if you turn onto Stella without stopping first and someone is coming south on Stella, you could quite possibly be T-boned or rear-ended.

This intersection has been a problem for the last ten years but the construction detour has made it much, much worse.

You have lost the respect of many constituents in the very riding that you are supposed to be representing, and rightly so. We are disgusted with Bill 23 and your support for this assault on our environment and democracy. Trying to rush this through Parliament by having only 30 days for public consultation shows how scared your government is to hear all of our voices.

Your tactics will not stop us.

Destruction in the name of intensification

Do Pelham residents understand the direction of the Ford government? The value of our natural landscape is integral to our entire state of health. In every direction destruction is evident in the name of intensification.

Who will preserve our beautiful Niagara land for future generations? Commercial interests may oppose the championing of land as profits are their goal. We need to elect representatives who understand the necessity of parks, forests, and green spaces.

Are you unknowingly fueling carbon emissions and climate change? Look no further than the old water well in the field next door. Studies following the Wheatley explosion showed that two of three adjacent water wells were leaking methane, many times more climate damaging than CO 2. A report by McGill engineer James P. Williams states there are some 370,000 abandoned oil and gas wells in Canada, with 27,000 in Ontario. He found methane levels two to three times greater than federal estimates. Local maps show dozens of old wells in Pelham, with gas wells all lying south of Quaker Road. When a water well penetrates the bedrock which also is pierced by gas wells, then there is increased risk of gas in the water well. There is no thorough monitoring by the government (a provincial responsibility) which leaves the problem with landowners and municipalities. Because of local pipelines, the Pelham Fire Department is equipped with gas monitors.

Who's going to look after you?

What follows here may be an uncomfortable topic for some but it is nonetheless a necessary matter for consideration sooner than later for many. Have you thought about how you want to spend the final years of your life? Likely many have not thought this far in advance for themselves but maybe are facing that same question with aging parents. Are the long-term care (LTC) facilities that you see and have heard about going to be the proper answer for you or your parents?

You may recall during the beginning of the pandemic that some LTCs had significant outbreaks of the coronavirus within their premises. Presumably, there were a number of factors such as the frailty of elder folk, proximity of residents, confined space and other elements that contributed to the high contamination rate in some LTCs.

One of the reasons for the rise in the number of both private and publicly operated LTCs is the fact that people are living longer and are likely to suffer from the onset of the usual frailties associated with advanced years.

Former Governor General Adrienne Clarkson likely spoke for many elders when she said, “I want to remain independent in my community for as long as I am alive.” She, like so many elders, wants to stay in her own residence as long as she is physically able. It appears this is a growing sentiment among seniors who hope to avoid being instituted into a long-term care facility.

Likely there will always be a need for long-term care facilities for some members of the aging population who are no longer capable of looking after their basic personal needs. Many do not have family capable of providing care and are totally dependent on full-time care provided by others. However, many seniors can continue to live in their own familiar surroundings with a little help, and do not yet need the TLC provided by LTCs.

Should this trend for seniors to live longer in their own residences continue to grow, it will increase the need for the funding of home-care programs and home-care workers. According to some studies, such programs would be more humane and economical than building more long-term care facilities.

The Niagara Region government provides nine long-term care facilities located throughout the Niagara area. These locations attempt to accommodate seniors near their former homesteads and family members. The Region provides better quality care programs due to the former leadership of Douglas Rapelje, who was widely recognized as an outstanding advocate for seniors and especially senior care.

And so the fact remains that everyone needs to consider the questions of with whom and where they will spend their final years, and whether that be in a private or publicly operated long- term care facility. It would be wise to consider the preferences and options before the necessity for personal care is on the doorstep. Otherwise, one’s care will be at the mercy of the market conditions at that time of need.

This has been shared 0 times

Can you take advantage of a mortgage port to save money in Pelham?

Get Connected to the Village Media Network!

Get a Free Community Hub Program with any annual display package.